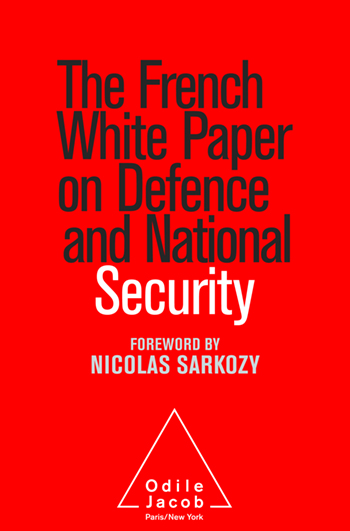 The French White Paper on Defence and National Security sets forth a detailed roadmap for defending the nation’s territory and security interests in a globalised world. It also describes how France can contribute to a wider and more effective role for Europe on the international scene.

Upon being elected President of the French Republic, Nicolas Sarkozy appointed a wide-ranging Commission to appraise France’s defence and security strategy. The resulting White Paper surveys today’s uncertain world and addresses key questions in the field of international security. It embraces European developments, the transatlantic partnership, the evolution of the United Nations and the changing position of the Western world and its relations with the Asian and African powers. It tackles key changes in French defence and security policy in the coming years, and the essential role of knowledge-based security and intelligence gathering, nuclear deterrence, the protection of citizens, as well as of French and European territory, and future operations abroad.

The book considers questions that lie at the heart of modern military and political strategy. Issues dealt with include Jihadist-inspired terrorism, proliferation of ballistic missiles, preparing for massive cyber attacks, the future shapes of warfare, and the tools for building peace that globalisation affords.

This White Paper will interest everyone concerned about international security and the role of citizens in contributing to their own security.